A slow metabolism is often quoted as the cause for weight gain. Whether that’s true or not, the market abounds with products claiming to raise metabolism and promote weight loss. Should you trust them? This article explores the myths and facts surrounding metabolism.

The human body never rests. Even asleep, it’s busy keeping itself warm, breathing, circulating blood, and doing other basic functions. Metabolism is the sum of all these biochemical processes working non-stop to keep the body going. Metabolic rate is the rate at which it uses energy or calories to perform these processes.

Most of the calories the body burns each day is for basic functions such as breathing and maintaining the proper temperature- this is referred to as the basic metabolic rate. It accounts for 60 to 75 percent of total caloric needs. The other part of metabolism is made up of physical activity and the digestion, absorption and storage of food.

Unfortunately, factors that are out of our control such as age, gender, and genetics mainly affect basal metabolic rate. Other factors such as exercise, diet and body composition may affect metabolism but at varying levels.

Food That Increases Your Metabolism?

Green tea and caffeine-containing beverages claiming to give metabolism a surge are inundating the supermarket shelves. Some supplements are starting to pop up on the market, promising to boost your metabolism and testosterone. Additionally some diet books talk up the benefits of spicy foods. Are these claims founded? Here is the low-down on some of the most popular foods and substances touted as metabolism boosters: 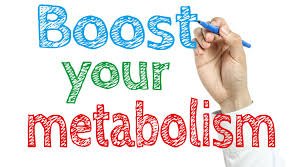 What Really Works to Speed Up Your Metabolism

By far the best way to positively affect your metabolism is to move that body. Both aerobic exercise and weight training.

Although some foods or beverages may temporarily and slightly boost metabolism, the best way to have a long lasting and significant effect on your total metabolic rate is to engage in more aerobic and muscle building activity. Add this to your list of reasons why you should be more active!