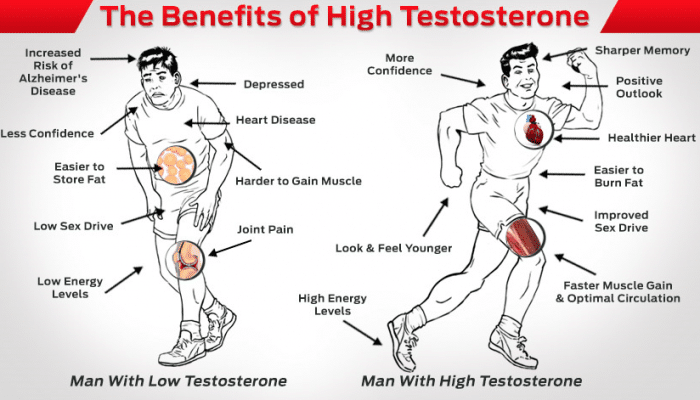 Testosterone is the primary male sex hormone, which aids in the development of the male physique. The hormone helps men develop the characteristics that identify them as male. Some of these characteristics include; a deep voice, huge body muscles, growth of more body, and facial hair among many others. The testosterone levels in the body are measured in nanograms per deciliter (ng/dL). The normal testosterone levels range between 280 and 1,100 ng/Dl. The measurements are also taken in nanomoles per liter which is about 35 nanomoles per liter (35 nmol/dL). The levels of the testosterone in the body may, however, surge to very high levels at times. This is a condition that rarely occurs though. It is majorly caused by testosterone boosting treatments and medication.

Testosterone levels above 1100ng/dL or 35nmol/L are considered abnormally high.

This begs the question: Does the extra testosterone have any effect on the body? If yes, which changes does it bring to the body? To answer these very essential questions, let’s explore the aspects surrounding high testosterone levels and find out the possible effects of the condition.

When the testosterone levels are high, they cause some physiological effects, just like any other component in the body. Some of the physical effects include;

Testosterone and other androgen hormones have been proven to promote the development of a strong bone structure. Testosterone is particularly notorious in the promotion of more bone volume. This growth is more pronounced in the jawbone. The jaw bone becomes wide and develops sharp edges. This explains why men have a heavier and stronger bone structure that women. It is also evident that men tend to have bigger and more pronounced jawbones.

We have already established that testosterone helps to promote the bone structure. One of the most visible changes in this area is the shoulders. The pectoral girdle broadens. The shoulder girdle and muscles have androgen receptors. High testosterone levels promote an overly active androgen activity, which causes excitement in the shoulder girdle and muscles. More protein synthesis takes place, hence the buildup of more muscles. The promotion of the bone structure and muscles translate into broadened shoulders.

The development of strong body muscles is one of the fundamental functions of testosterone in males. The hormone enhances protein synthesis which helps develop stronger muscles. More metabolism also provides the energy needed to build leans muscles, as well as protective nutrients that fight against infections. Infections would quickly wear out your muscles.

Some scientific studies have associated increased sex drive with testosterone levels.  When testosterone is converted into estradiol, the sex drive gets a boost. Increased metabolism and lean muscle build-up also allow better blood flow. Good blood flow is crucial for developing and maintaining erections. All these are issues related to male sex performance and libido. It is highly unlikely for a man with high testosterone levels to suffer from low libido or infertility.

High testosterone levels boost energy and make the body active. If you exercise, it becomes easy for your body to burn fat. High metabolism rates and protein synthesis prevent any further deposition of excess fat in the body. All fat intake is burned and converted into energy.

Various studies have linked the development of high-density bones to high testosterone. This change is mostly clear in the back area. Increased testosterone causes the formation of stronger bones and a significant increase in the overall body frame.

Various scientific research has linked the metabolic rate to the levels of testosterone in the body. This contributes to how the body stores energy and the amount of energy it releases. Higher testosterone translates into higher body metabolic activity, hence reduced body fat deposits in the body and development of more muscles.

It is in the nature of men to be more aggressive than women. The physique of men contributes majorly to this. The stronger muscles and bones make men more competitive and vigorous. The testosterone hormone contributes immensely to this male nature. The body having more testosterone makes the trait of aggressiveness to be more ingrained. This can be clearly observed when a person gets angry, the body responds by producing more testosterone which prepares for a fight or a flight response.

Testosterone also plays a part in creating feelings of confidence and well-being. This can be useful at times as it helps one to raise their self-esteem. It also helps someone to accomplish more tasks and be more exploitative. However, when the testosterone levels are high, one may tend to be overconfident and make mistakes. Hard headedness and arrogance are at times part of the overconfidence.

Testosterone affects one’s self-confidence; high testosterone levels lead to overconfidence. The aggressiveness and overconfidence translate into undesirable traits such as risk-taking and impulsive behaviors. The overconfidence makes one feel superior to everyone. Poor decision making is also common in such scenarios. They make decisions without first analyzing their consequences.

Scientific research has found that most males with small eyes have high testosterone levels. It further reveals that small eyes may mean the men may have been exposed to high testosterone in the womb. Similarly, they link women with big eyes to have a high level of the female hormone estrogen.

As a result of the benefits associated with testosterone, such as increased energy, one is able to endure physical effort for a longer time, especially in hard physical training and doing various tasks. This is very beneficial to athletes. An increase in testosterone levels consequently increases the endurance level.

Looking for a Testosterone Booster? Check out This Thorough Article